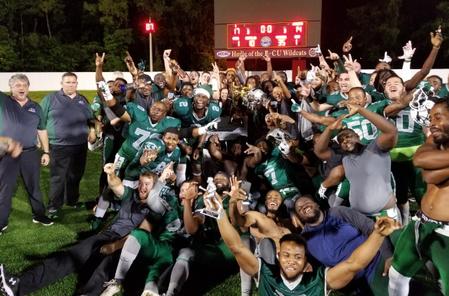 The Gladiators came into the game with a record of 12-1 and in 2015 had won the Alliance Bowl. So in their favor was some experience in being in the big game. This year also reunited Head Coach Gerald Perry and Coach Anthony Hills the same combination of coaches that masterminded the 2015 Championship. The Gladiators have a league leading defense and also lead the league in running yards.

never played in the big game before. However, they were built to

the south of Florida assembled specifically to win this game. The

passing game that is explosive and dangerous.

down strike. It was an acrobatic catch by their star receiver over the

Gladiators star DB. The Raiders went for a 2 point conversion

knowing the Gladiators have a great kicking game and made it. The

score was 8-0. Later in the first quarter the Gladiators defense came

up big and gave the offense the ball in great field position. The Glads

it 8-7 Raiders. I can't really describe how hard a hitting game this was

at this point. The Raiders lost their starting center and the Gladiators lost this years #1 running back and a defensive lineman all in the first quarter.

The second quarter saw the Gladiators make several costly mistakes. The first one occurred when two defenders ran into each other allowing the Raiders receiver to score. The Raiders were stopped on their 2 point conversion attempt making the score 14-7. Then at the end of the second quarter the Gladiators were in scoring position and twice missed wide open receivers in the end zone. Then missed on an easy field goal. At halftime the score was 14-7 Raiders.

​During halftime Head Coach Perry calmed everyone down and helped them shake the big game jitters. Both teams as it turned out were staying with their game plans and headed back out onto the field.

​In the third quarter the Gladiators started to wear the Raiders down. The hard running game was taking its toll on the Raiders defense and the Gladiator defense had gotten back in rhythm and was stifling the Raider offense. Coach Perry then made a surprising move, he benched his starting QB who was struggling all night and went with his backup for a couple of series.  Later in the quarter he switched back to his starting QB and the Glads drove down into to long field goal range and surprised the Raiders with a 42 yard field goal attempt that was made with yards to spare. This seemed to shake up the Raiders and they started fighting on the sidelines. They didn't think the Gladiator kicker had that kind of range and it scared them. The third quarter ended 14-10 Raiders.

​The fourth quarter saw more of the same. A stifling Gladiator defense and a Raider defense that was getting tired with the constant pounding they were taking. At the mid point of the quarter the Gladiators changed offensive plans and went in to scoring mode. They quickly drove down the field but made a mistake that turned the ball over the Raiders. With about 4 minutes left in the game the Gladiator defense came through again and shut down the Raiders giving the ball back to the Glads. The Gladiator offense was now firing on all cylinders. The QB was hot and the receivers just wouldn't drop anything. They were hit so hard helmets went flying but still not a single drop. They drove down the field to inside the red zone with pass after pass. Then Coach Perry called something that totally caught the Raiders tired defense off guard. He called a QB run. The Raiders didn't know that the Gladiator QB had been drafted by the NFL as a receiver and that he was fast. The ball was snapped to him and everyone expected a pass as there was barely a minute left in the game. The ball was snapped and he took off for the corner of the end zone and with 1:09 left in regulation ran in untouched for the go ahead score. Gladiators 17 - Raiders 14. The Raiders had one last chance with a minute left but the Gladiator defense stripped the ball and recovered the fumble to end the game for the Gladiator win.

It was billed as a great game and it turned out to be one of the best in Alliance Bowl history. In the end the Gladiators were just too much, too big and too strong and the Raiders faded late in the game. Granted the Raiders were younger and maybe a bit faster but when you get tired that doesn't matter.

For the Gladiators it was their second FFA Championship in just 4 years making them one of the two elite teams in the FFA. Now the question becomes can they make this a dynasty? This author thinks so. They have a good mixture of youth and experience. There coaching staff is second to none and they have a well run organization. Come see them in 2019 and decide for yourself. But for now just call them CHAMPS!